Introduction
The Middle Kingdom (2040-1640 BC) is seen as a classical period of art, history and literature in particular. Contrary to the Old and New Kingdom, great parts of the monuments of this period did not survived, because they were built in the finest limestone, susceptible to decay. Therefore, much of what we know concerning daily activities derives from grave goods. At several important sites, for instance at Bersha, a village across from present-day Mallawi, major provincial cemeteries flourished. Deir el-Bersha is actually the name of the large cemetery which include some shaft and rock-cut tombs belonging to high officials of the Old and Middle Kingdom. They were employed by state at Hermopolis, a provincial capital in Upper Egypt. The tombs provide interesting archaeological remains in the matter of domestic and agricultural activities and crafts. During the Middle Kingdom the wealth of local officials increased. They became more power, and this is reflected in the number and diversity of their tomb equipment.
One of the tombs (tomb 10A) belonged to Djehuthynakht (Dynasty 11-12), a local governor, and his wife. His tomb not only contained lots of beautiful objects such as the famous Bersha coffin, but also a huge amount wooden models. This report will enlighten one of these models concerning brick manufacture, with a focus on history and brick manufacture.
M

This wooden model shows 5 men producing mud-bricks, a very widespread skill in traditional societies. Ancient Egypt was no exception. Therefore it is remarkable that brick-making scenes from ancient Egypt are not extensive. It seems that brick makers did not earn a special title. Maybe it was seen as a widespread skill and therefore treated as a form of labouring.
This rare exemplar shows the brick- making process in a simplified representation. The wooden base and the figures are painted. The dark brown colour on the base points to the clay being dug in order to make the bricks. The five men wear white kilts and short black wigs. For insertion to the base the feet of three men are carved as pegs. On the left one of the men breaks out the hard ground with a hoe, while the other is digging out clay. His hand also bears traces of the dark brown clay. The two men in the middle are carrying a pole. This pole was probably once provided with a basket in which clay was transported to another brick-maker. Unfortunately here the basket is lacking. The final brick-maker puts the clay into a mould of wood in order to form a brick.
This piece of wood was recycled. The wooden base has some horizontal slots that serve no function. It clearly had an earlier use.

Historical details
One of the rock-cut tombs in Deir el-Bersha is tomb 10, shaft A, of Djehutynakht (Dynasty 11-12) and his wife (also named Djehutynakht). He was a local governor and must have been an important figure given his rich burial equipment. It contained lots of interesting goods, and probably the largest amount wooden models ever found: more than 100 models, including this model of men making bricks. The tomb was excavated in 1915 by archaeologists from the Harvard University-Boston Museum of Fine Arts Expedition (MFA), with G. Reisner as director. The burial equipment, awarded to the MFA, was transported by ship to Boston. Unfortunately, there was a fire on board and Djehutynakht' s grave goods were in danger of being lost. Thanks to an attentive crew member the goods were preserved and only suffered slight water damage. They arrived in Boston in 1920.
Djehutynakhts's burial equipment is currently on display in the Museum of Fine Arts, Boston. Most of the wooden models have been restored carefully, also because they were damaged by robbers in antiquity. Originally, only a few objects, real masterpieces such as the famous Bersha coffin and the Bersha procession including a male and female offering bearers were on display. Currently, the Stanford and Norma Jean Calderwood Gallery (Gallery 119) is equipped with much more of Djehutynakht 's grave goods. Wooden models are well represented.
Wooden models
Egyptian craftsmen created all kind of models. They could be small representations of various objects. However, within Egyptology the word 'model' refers in general to servants who are involved with agriculture and animal husbandry, food preparation, industrial processes, offering bearers and boats. Limestone statues of people already appeared in the tombs of the elite during the Old Kingdom, but wooden models were a new development during the First Intermediate Period and Middle Kingdom. Wooden models were believed to support the dead in the afterlife by imitating objects from life and offerings of food and drink. Actually, they functioned in the same way as the scenes on the walls of tomb chapels: by magical means the servants fulfilled daily tasks needed for continuing life in the hereafter.

Particular during the Middle Kingdom, the time of wealth for the provincial elite, the Egyptian artists produced the most extended models. Lots of them were innovative and colourful, showing various activities. A large amount was made of recycled wood for instance from old chests. Also leftovers of other objects were used to produce models. Sometimes, especially those of recycled wood were of less quality and coarsely carved. However, the majority was very detailed and refined. Often, the tomb included two (or more) exemplars of each model in order to have plentiful supply of offerings. It also indicates the importance of the symbolic workers in relation to a successful and pleasant life after death.
Wooden models offer an insight in many activities, such as food and drink preparation, manufacture activities and in industrial processes that might otherwise lost. They give insight in local burial customs and provide a better understanding of the conventional daily activities of the ancient Egyptians such as brick making.
Historical development of brick-making
The precursor of brick manufacture was the wattle-and-daub technique, already used at Pre-dynastic sites. This technique included constructions with soil coating and interwoven branches, and read walls plastered with mud. This gradually developed in a slightly more advantage technique: moulding of bricks, basically used for building walls, and subsequently also for other applications.
The Egyptians made their bricks of mud. The word 'mud-brick' is an often used term within Egyptology. However, 'adobe' is a more general used word. The word derives from the Egyptian word Dbt which meant brick. The first signs of using bricks were found in the south of Egypt at Hierakonpolis, one of the most important early archaeological sites of Egypt (4000-3050 BC), near modern Kom el-Ahmar. 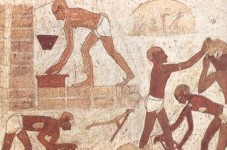 The ancient Egyptian brick makers used bricks mainly as building material. It has been calculated that one man could produce approximately 750 bricks pro day. The construction of brick buildings was fast and economically attractive. The extensive use of sun-dried bricks was cheap and they were easy to work with. One of the characteristics of bricks is that they keep buildings cool in summer and warm in winter. As a matter of fact they are good isolators. Unfortunately, the disadvantages like a quite fast decay, vulnerability to moisture and the possibility to attract infestation, were always lurking.
In some instances bricks served a special need. For instance, magical bricks were placed in New Kingdom temples and tombs. They had a protective function. Bricks were also used as markers in the laying out of new structures. Sometimes, in particular during the Middle Kingdom, bricks contained inscribed plaques of faïence or metal and had been stamped with royal or official names. They were included in temple foundation deposits as part of a foundation ceremony. Also miniature brick moulds have been found in such deposits. At the same time, bricks as building material was predominant.
Type, form and seize
From the dynastic history it is clear that bricks can be divided in the large ones used for major public works and the small ones which were meant to built houses and small private tombs. In some cases cross-usage occurred. Mostly the Egyptians used sun-dried mud-bricks. Contrary to fired mud-bricks, sun-dried mud-bricks are less harder. Mud-bricks are vulnerable in relation to water but the absence of rain and the abundance of sunshine in ancient Egypt made bricks the preferred building material. Baked bricks were exceptional and not in use extensively until the Roman Period.
Bricks could have different colours. The colour depended of the additives and the preference of the brick makers, and were often environment related.
As a result of the fact that there were lots of brick-makers, there was not an exact standardisation in seize, but that was acceptable. The sizes varied with time and use. Some environment factors, and local constituents could influence the form and structure of the final exemplar. Shrinkage and disturbance whilst drying occurred often. Unevenness could be restored with good masonry, the way of layering, and using the right composition for mortar.
Technique
The current way of handmade bricks in countries all over the world shows lots of similarities with that of traditional brick making in ancient Egypt. Obviously, the river Nile was an essential source in many ways; the Egyptians needed water to produce bricks. Mud was dredged out from the bottom of the Nile. As can be seen in some tomb depictions people also produced mud by mixing water and soil. In that case they extracted water from a pit or pond nearby the building project.

They broke out the ground with a hoe, as showed by the model. Brick makers used chopped straw and chaff as binder. These elements made bricks lighter. Using only pure Nile mud meant a shrinking rate of 30 %, which was detrimental. Often they also added pebbles and sand in order to get stronger bricks, more resistant to cracking and shrinking.

After dredging out and mixing the mud, it was transported to one of the brick makers who put the mud into rectangular moulds. A small number of these moulds have been found.
The brick maker smoothed the mud by hand, loosen the mould from the brick and left the brick for drying in the sun for about three days. Then he turned it over. Within one week bricks were firm enough and ready for use.

Constructions with mud-bricks
Mud-bricks were used throughout ancient Egypt for domestic, religious and funerary constructions. Mortar was used to join the bricks together. It was generally of the same structure of mud or somewhat finer. Usually no straw was added.
In case of building walls, bricks became more stability by inserting timber beams and narrower pools, especially

needed in very thick walls. The inserted material provides the wall against cracking. Layers of thick grass and reeds served a like purpose. The craftsmen used a bonding course, laying bricks in an overlapping pattern, to form an even stronger structure. A fact that we still use today. For the construction of vaulted roofs, arches, domes and corbels the bricks had sometimes a specific and wedge-shaped form. In order to provide more grip for the mortar, bricks for vaults were deeply grooved by the workmen's fingers. These bricks were clearly thinner and lighter because they contained straw. The complex construction of vaulted roof asked special skills of the craftsmen.
Unfortunately, comparing with other manufactures, remains of wooden models of ancient Egyptian brick manufacture are poor. Yet there are many remains of Egyptian mud-brick buildings, but much of them are at ground level. That is why many details of these buildings are hard to understand.
Research
Wooden models are interesting starting points for in-depth research of daily activities, manufacture processes and religious practises. The high officials of ancient Egypt desperately needed wooden models for the future; we needed them to understand and interpret the past. Therefore these models deserve special scientific attention. Though, by more specialised and technological developments of archaeological and geological practises the understanding manufacture processes will certainly increase.